Last week my group and I finished the Dungeons & Dragons campaign that I have been the DM (Dungeon Master) for, so I thought that I would take the opportunity to reflect on how it went.  In this article I will go through the good points, the bad points, what I could have done better, and what my players could have done differently.  My aim is to provide some insight for those of you thinking about running your own campaign (spoiler; you should!).

I thought that I should start with a little background on myself with regards to RPGs, so as to give this article some context.  I have been playing them on and off since shortly after Dungeons & Dragons third edition was released (2000).  Over the years I have played pretty much every major RPG system, and have been the DM for only a few (D&D of course, but also Vampire the Masquerade and D20 Star Wars).  I definitely prefer playing only one character rather than controlling the whole world, but sometimes I have a story idea or it’s ‘my turn’ to run the game. 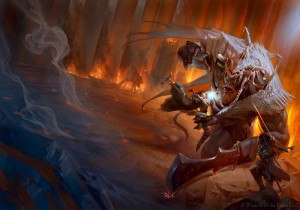 You know at least one player that would ask if they could wield that sword.

This group was made specifically with the intention of me running a game for beginners.  When I announced on our Facebook group that I was going to run a campaign, I was inundated with requests to join. Unfortunately I had to turn the majority of these down as I wanted to cap the group to five players plus me as DM.  In the past I have played in larger groups than this and I have found that players can get ‘lost in the crowd’ as people are clamouring for the attention of the DM.  By keeping it to five players I hoped that each of them would receive the appropriate amount of time for their character to shine.

For the actual characters involved in the campaign I set no restrictions on what the players could choose; if they all wanted to play Barbarians then that was fine with me!  As it turned out, we started with a Ranger, Cleric, Fighter, Rogue and Druid; quite a good mix.

I am a big fan of the point-buy system for generating character stats, as letting people roll can sometimes create a massive party imbalance (at this point I will always reference the Mitchell & Webb sketch about Angel Summoner & BMX Bandit, with the player that rolled loads of 18’s taking on the role of Angel Summoner and the rest of the group being versions of BMX Bandit).  I’m sure that there will be those of you that disagree with this (which is fine by the way) but I like the point-buy system as it keeps everyone on a level playing field.

We would be playing once per week at The Games Store on their Friday games night.  For various reasons (Summer holidays, illness, etc) we missed our goal of meeting once a week, but these things are unavoidable. The only element of control you have in this situation is what you do when a player cannot attend.  Since my players had attended the first few weeks with no hiccups, I decided to postpone the session for a week whenever someone could not attend.  However, this may not be right for every group, but since my players had shown some commitment by attending those first few weeks, I gave them the benefit of the doubt.

What worked for my group may not work for every group though, so you may need to come up with a system for what to do when people cannot attend.  The most popular method I know of is to have their character either be controlled by another player or the DM for any session they miss.  Another method is to have their character just disappear for the session and have the player miss out on any experience the others get, but I am not a massive fan of that.  To be honest, if a player is consistently missing sessions it is probably best to retire them from the group.

As for character experience, I dished it out at the end of each session.  That way, players could level their characters up between sessions and we could crack on with the campaign when we were sat around the table.

Shame you missed last session, but it worked out well because the rest of us were killed by a dragon.

How Did It Go?

From my point-of-view as DM I think it went quite well.  Towards the end of the campaign one of my players decided to start his own group on a different day, and since finishing this one, three of my players are going to take it in turns to run their own campaign.  Based on that, I like to think that I’ve inspired them to run their own campaigns, but it may just be that my was so bad they wanted to do a better one!

Writing my own campaign has definitely highlighted the need to be properly prepared (the 7 Ps springs to mind). Something that I have always disliked as a player is when you can tell that your DM has not done much planning and is improvising excessively.  It takes a very skilled DM to be able to pull that off, and the harsh truth is that not many people are that skilled.  Knowing that I was definitely in the latter group, I tried to prepare as much as I could (I even cancelled one session in advance because I knew what I had prepared so far what not good enough).  In short, being prepared helps the sessions go a bit smoother.

One thing that I noticed is that you can never have enough maps!  Draw a map of everything (within reason! You don’t need to have every building marked down in a city, but a general idea of the layout is helpful). Some of my maps were quite crude; drawn in biro and with some scribbling out, but they served their purpose.  Maps help give the adventure some more solidity (and helped me out when my descriptive skills were flagging; ‘theatre of the mind’ can be quite tough).

The storyline I had written was quite basic; the players are part of an adventuring guild.  They are given a mission to kill some goblins that are raiding the countryside.  The mission then escalates into something grander and they must save the city they are based in.  Simple stuff, but this was for beginners so I didn’t want to do an epic political intrigue campaign, or massive dungeon crawl like the old Temple of Elemental Evil.  I did throw in a bit at the end where the players were never really sure which side of a conflict that they were meant to be on, so they didn’t have it easy the whole time!

Overall I would say that it went pretty well, but there is always room for improvement.  Which leads us onto the next part.

What Could I Have Done Better?

Memorable characters is something I could definitely have done better.  The group had one fellow guild member who acted as their ‘handler’, but apart from that they did not interact with anyone overly much.  The main villain of the campaign did not reveal themselves as a villain until near the end, but I could have done some interaction with the group or foreshadowing to introduce them earlier.  Basically, I should flesh out the NPCs more.

More maps!  I did several maps of dubious quality, but I still did not do enough.  As stated above, maps help solidify players’ mental picture of the world you are setting the game in.  In short, maps are great.

I think that my group would have enjoyed more time in settlements, as much of the campaign was in the countryside. The brief amount of time that we were in the city led to some hilarity as the halfling rogue got arrested for burglary, and the light cleric was fined for vagrancy.  The rogue even had some negotiations with the head jailer (who from their conversation clearly had a jailer-jailed relationship going on) about the cost of his release.  It didn’t necessarily need to be more interaction in the main city; I should have interspersed more villages out in the countryside.  TLDR; interaction with NPCs, even insignificant ones, is fun for players.

Inspiration.  I didn’t use this mechanic at all, and that is something I regret.  Inspiration is meant to be a reward for roleplaying their character well, but it is definitely a tool of positive conditioning for the DM to use.  I was never really sure when I should be rewarding certain behaviours, so I erred on the side of caution and didn’t use inspiration.

These points are not massive issues but if addressed could definitely make any future campaigns I run much more enjoyable.

This guy would make a memorable villain!

I enjoyed running the campaign but I’m not going to lie to anyone out there; it’s a lot of work!  As the DM you need to be very familiar with the rules but also apply them with an even hand.  You also need to have prepared in advance, but not so prepared that players cannot deviate from what you’ve written (there’s nothing worse than rail-roading).

Dungeons & Dragons fifth edition is a great system (it’s definitely my favourite D&D so far) which definitely made it easier for me to run.  The rules are straightforward and the advantage & disadvantage system is one of my favourite mechanics ever.

To anyone out there thinking about running a group, go for it!  It doesn’t have to be the longest campaign in the world (mine was about 7-8 sessions in total), it only matters if everyone enjoys it.  Give it a try, you never know, you might be a great DM!

One Response to “Thoughts On Running a Dungeons & Dragons Campaign”

This site uses Akismet to reduce spam. Learn how your comment data is processed.